Each of the planets has a direct effect on the astronomical signs, whether positively or negatively, and according to each new planetary movement, those influences and their repercussions on the events that take place in the days of the zodiac signs change.

The moon, like other planets, has its own effect according to its movement on people and astronomical signs.

The moon is considered a planet that has a strong influence on people psychologically and healthily, but the reflection of its movement on the astronomical constellations is different from the rest of the planets and is considered the sweetest and most beautiful through its positive effects, according to the assertion of astronomers. 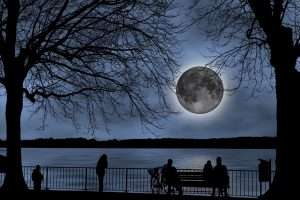 It is noticeable that the effects of the moon on people’s moods are not for long. They come quickly and disappear quickly, whether they are sadness or happiness.

The moon is considered the organizer of the world of dreams, imagination and instincts, and if we want to describe someone as a “moody moon”, it means that he is a moody person who loves music and is sensitive to feelings, poetic and romantic ..

The moon is considered the planet of sensitivity and delicate feelings, as it appears to people to be affected by the situations surrounding them (such as crying over a human scene on television), as it develops sensitivity within people.

It is known that every planet has a day of the week, and the moon’s day is Monday, and it is also the day of Cancer. The moon is the actual ruler of Cancer, so we find this sign suffers from great sensitivity ..

It is noticeable that during the moon’s transition from one place to another there is what is called the gap, which is the void left by the time of the moon’s transition from one astronomical sign to another before it begins its impact on the new astrological sign. The duration of the gap or “clear path” varies from one transition to another, it may take a day or several minutes until The moon begins its influence, and the astronomers are advised during this period not to make decisions or wait for important matters.

There is what is known as a “lunar sign” and usually it does not follow people’s expectations much, and all astronomers do not deal with it because it requires accurate calculations and knowledge of the birth hour and the planet that was present at the time .. knowing that every person has a lunar sign that determines his nature, emotional personality and manner of dealing With others and with a lover, does his way of thinking depend on emotion or mind.

A strange event in the sky of Japan

A strange event in the sky of Japan

Turkey and the S-400 controversy with the Allies!

The early American elections are "the master of the situation" ... and their result is in favor of ?!