The issue of buying a loaf of bread in Syria is no longer an easy and simple matter. Rather, it has become complicated about a month ago between queues and “cages” to organize rounds, fighting, shouting and blood …

About a month ago, bread, which was considered a red line for the Syrian authorities, has lost its color and it has become permissible to touch it in all aspects that are not without insults that have reached in some of them to the point of humiliating the citizen in order to obtain a bundle of bread ..

The bread on which millions of Syrians were taken in the days when the poor Syrian could no longer obtain anything but this material to satisfy the hunger of his children.

The bread that was subsidized at one of the days of the beautiful Syrian times is today only for those supported.

Many measures taken by the Syrian governments to tamper with this article, starting with the smart card, leading to the increase in the price of the bundle for weakness with the loss of its weight.

Just as the dollar in Syria has its black market that controls it while the government is sleeping on the central price, which does not even enter into its own accounts .. Likewise, fuel, gas and bread have a black market .. Perhaps one is not surprised that there is a black market for fuel or gas, and perhaps it exists in other countries and is not restricted to Syria … but Syria was really the first to innovate, and through the procedures of its concerned ministries, a black market for bread bundles, in which the price of the bundle reached about a thousand Syrian pounds in some regions and 700 Syrian pounds in other regions … and it is strange that you will not search much to find this market, so near every oven is now There is a market where merchants buy a bundle of bread from the oven for 50 Syrian pounds only and sell it as they like.

The Syrian government has not taken any decision to harm the “loaf of the poor” without justification “according to the statements of those concerned.” It initially saw that the solution would be to include the bread material on the list of the “smart” card in the hope that the intelligence of the card would outweigh the traders of the bread crisis, but the intelligence of the traders Supported “from outer space” actually surpassed the intelligence of the card, and the tragedy struck the head of the poor, who found himself surrounded by merchants whose existence he did not even think of imagination. He counted them …. “The list is increasing, until the citizen is forced to focus on dealing with bread and its merchants, despite his nose, as it is the only material that his money allows him to buy. It has become the only food for hundreds, if not transferred, to thousands of Syrian families …

With the failure of the card, the crisis government decided to remove subsidies from the “red line (bread)” indirectly, and to raise the price of the bundle to double with its weight loss, but hey, do not hurry to judge .. it has made it clear that the price of the “bag of bread” was one of the reasons for the price weakness. It turned out that he occupies a quarter of the price of the bundle … but it overlooked the issue of clarifying whether the citizen could tell the seller “Kiss me” …

A crisis whose chapters did not end here. The queues of people are still standing in a clear insult for hours at the doors of the bakeries, while one of the people who are supported comes and takes his bread in a few seconds, which caused the outbreak of many malts at the doors of the ovens, which turned into a hit in most cases ..

Perhaps this case is not new to “beating and insulting” at the doors of Syrian bakeries, especially in the cities of Damascus and Aleppo. However, this case was sparked by a great anger that filled the pages of the Syrians after the camera of one of the mobile phones was able to detect an old man being insulted and beaten, which caused the blood of his dignity from his head. The guilt of this old man was that he demanded one of the “aliens” to stand in the same way as other citizens in the role..the matter that angered the “alien supremacy”, as it was only the beating of an old man who had been standing for hours waiting to get bread .. The story did not stop here, but was simply able To take what he wants from the bread after the man has beaten and to go to complete his day without any account.

Yes, in Aleppo, the red came back to bread, but not to be a red line, which should not be approached .. Rather, red blood would be the price of obtaining bread. “

The aggravation of the issue and the spread of the image of the injured man on the Syrian communication sites, it is certain that he will contribute to the solution .. But hey, it is not solving the problem of bread, but rather solving the problem of the injured man .. It became known that the government’s actions after every Facebook light on a specific problem, and indeed the authorities rushed to the man’s house The injured man, to see if he wanted to file a complaint, except that the man refused to file a complaint except to God, “Who knows if it was just his request to respect the role blew his head blood, then how if he thought of submitting a complaint against the alien who we do not know of which planet is supported”, the man’s problem is solved Facebook rejected the complaint, while the real problem remains under studies and experiments, as solutions to its results are doomed to failure before they are implemented.

The Syrians have nothing but to rely on God and pray and supplicate in the hope that these prayers will return to the loaf of bread his blessing and dignity in Syria.

Article from the news
2 days ago

Article from the news
2 weeks ago

Article from the news
3 weeks ago

This is how James Bond mourned his original hero 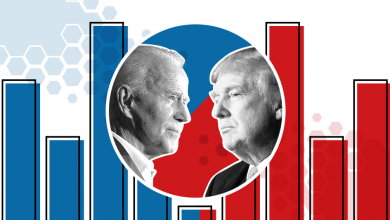 The latest developments in the US presidential election results